According to one dictionary, a “March hare” is “a brown hare in the breeding season, noted for its leaping, boxing, and chasing in circles”. I’m not sure many Clubbies were into breeding (well, not in Waiouru) but the rest of the description seems to fit – certainly the chasing in circles. Given that a March hare featured in Alice in Wonderland, it was probably touch and go as to whether we called ourselves the Mickey Mouse Club or the March Hare Club.

In my day, March was the month when many junior class cadets stopped their basic training after six weeks or so and were culled into other groups – S.C. or U.E. classes at the Whip Wing, a reluctant set of “Gen Edders” at the same place, and trade training at the Apprentice Wing. I think any juniors who weren’t in any of these groups continued on with their basic training and then went to their Corps Schools and began relevant courses. It was a time for most of starting to do the training or education we had joined up for. While there was a sense of excitement about this, there was also the realisation that it was still only March, and there was a heck of a long time to go until the end of the year (or the next long leave break). It was also dawning upon us that our lives were very prescribed by our military masters and even though things relaxed a little after we came off basic, there wasn’t much to do of an evening or Sunday afternoon in Waiouru – just dig tunnels, shoot horses, or brew moonshine.

In 1965, when I was a senior class cadet, I kept a diary for the year (I still don’t know how it survived to this day). I thought I’d share an entry from the end of March – I think it captures a little of the routine and tedium of our cadet lives: 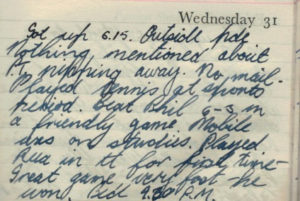 “Phil” was Phil O’Connor, “Mobile” was SSgt Ash McRae, RNZAEC, “Rua” was Tommy Moore, and “tt” was table-tennis in the Rec Room.

Kevin got in touch with me the other day, after about 30 years of us both living our post-Army lives in different places. We weren’t in Cadets at the same time, but met up after I graduated when we shared postings in the same camps. As ex Cadets, we had no problem connecting. He offered the following as a contribution to the blog (feel free to do the same if you would like to share a Clubbie story):

I entered the cadets on the 11th March 1959 some two months later than the rest of my Kippenberger class mates. The reason was my age, I was under 16 at the time I was accepted.

Subsequently I missed the RF Cadet basic and had to do a Regular Force basic at the RF Depot, this was followed in short order by a basic refresher course and a junior Q course to round out my first year in the cadets and of course an ample dose of CB throughout the year.

In 1960 I started my Corps training completing a Driver class 2 course in July and got my licence. In October it was back to the RF Depot for the Basic Instructors course. During this course I was selected for the RF Depot shooting team, we competed at the Army shoot and managed to win a heap of trophies as well.

My last three months in the cadets I spent most of my time at the RNZASC School completing the Corps Org & employment course before I graduated on the 24th March 1961.

In retrospect my first year in the cadets was bloody hard getting yelled out by RF Depot staff during the day and RF Cadet NCO’S and the Orderly Sgt at night, but I survived.

Memories both good and bad, you can be the judge:

Using thunder flashes to catch trout down by Gory Green

Trying to play the tenor horn in the cadet band 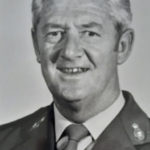 Warrant Officer Class One Lawrence Melville Taylor (known as Rusty) was born at Abbotsford, Dunedin, in August 1931, the youngest of six brothers, three of whom saw active service in World War Two.  The youngest of them was decorated prior to being killed in action, aged 19.

World War Two motivated Rusty’s enlistment in Miles Company, the Regular Force Cadet School, Trentham in July 1948.  He was promoted to temporary lance corporal as the first RF Cadet Company Sergeant Major and graduated to Infantry as the most efficient cadet in December 1949.  He was an instructor during 1950/51 for the first and second intakes of Compulsory Military Training and K Force.  During the waterfront strike involvement he was posted to Area 11, Dunedin and discharged at his own request as a corporal in November 1951.  He was immediately drafted into the 20 year old ‘Birthday Ballot’ CMT, excused full-time training, promoted to sergeant and served three years.  He re-enlisted in the RF as an Infantry corporal, January 1955. 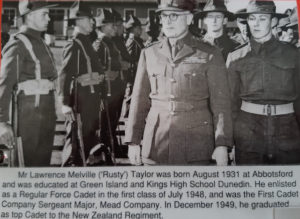 Rusty served on active service as a:

In June 1964 Rusty was selected as the first Assistant NZ Instructor at the Royal Military College, Duntroon, Australia, voluntarily reverting to sergeant.  During his three year tour of duty he frequently stood in as RSM, Corps of Staff Cadets, during the RSM’s absences and posting in 1966/67.  His tour of duty was extended six months in the acting RSM appointment until December 1967.

Following is the SPECIAL ORDER OF THE DAY appointing Rusty as the Inaugural Sergeant Major of the Army by the then Chief of General Staff, Major General Ronald Douglas Patrick Hassett, CB, CBE:

The first Sergeant Major of the Army is to be Warrant Officer First Class L.M. Taylor, BEM, RNZIR.  He will assume the appointment on 10 January 1977.

The Sergeant Major of the Army will be one of my principal advisers on all matters pertaining to the collective morale of Other Ranks in the New Zealand Army.  He will be a member of my personal staff and will accompany me on visits to Commands as required, and will also make his own liaison visits as necessary.  He will be responsible for making himself fully conversant with those matters likely to affect Other Rank morale and conditions of service and for keeping me informed at all times.

His appointment does not in any way supersede or alter the present channels of communication, command or administration, nor does it undermine the responsibilities of Commanders, Corps Directors or Staffs.  His purpose is to present the views of the non-commissioned ranks when called upon to do so.  He has been given direct access to any commander on matters associated with his duties.

This is a new concept in the New Zealand Army and one which I know will assist in the task of maintaining effective communication.   Further details will be published later. 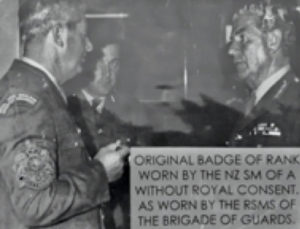 Rusty was discharged in August 1981.  He was appointed the Patron of Taylor Class, RF Cadets 1989.  Rusty and his wife Avis celebrated their Diamond Wedding Anniversary at their home in Nelson in February 2013.  Rusty died aged 85 on 31 January 2017.  He is survived by Avis and their 26 children, grandchildren, and great grandchildren. 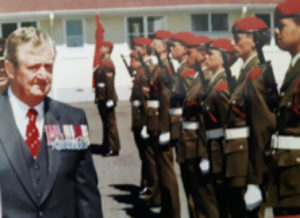 Kipling lost his own son John (Jack) in September 1915 at the Battle of Loos and while the poem is emotionally driven by that loss, it is also about the generic loss of loved ones in battle. Kipling wrote the poem as a prelude to a story about the Battle of Jutland in 1916, so the “Jack” can also be a reference to sailors (Jack Tars). I like the repetitive questions and use of the words ‘tide’ and ‘wind blowing’ in the poem, they echo the ebb and flow of the sea – and life:

“Have you news of my boy Jack?”
Not this tide.
“When d’you think that he’ll come back?”
Not with this wind blowing, and this tide.

“Has any one else had word of him?”
Not this tide.
For what is sunk will hardly swim,
Not with this wind blowing, and this tide.

“Oh, dear, what comfort can I find?”
None this tide,
Nor any tide,
Except he did not shame his kind —
Not even with that wind blowing, and that tide.

Then hold your head up all the more,
This tide,
And every tide;
Because he was the son you bore,
And gave to that wind blowing and that tide!

As noted above, the first Sergeant Major of the NZ Army was Rusty Taylor.

How many other ex Cadets have been appointed Sergeant Major of the Army, what are their names, and what cadet classes were they in?

Don’t forget, you can leave comments in the box below.