April Then and Now 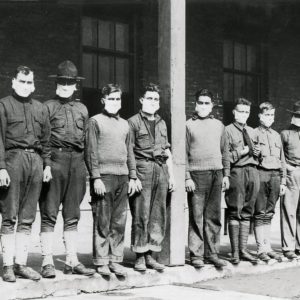 As we start into April and head towards week three of NZ’s Alert Level 4 in the Covid 19 pandemic, there has been plenty of facebook chatter (and humour) comparing our current situation with what it was like in Cadets. CB was never this easy say some. This is a breeze, say others – we were taught how to hurry up and wait!

The narrowing down of where we can go and what we can do certainly reminds me of our Clubbie existence. We would often spend our days – which dragged into weeks – going from our section (bedroom), to the ablutions (bathroom), to the mess (kitchen), to our Corps/Trade training or Education Wing (home office), to P.T. (out for a walk), to the Rec Room (TV in the lounge), and back to our section again. Oh, and I forgot about I.E. – you remember, painting stones white, raking gravel, and polishing any brass that wasn’t moving (housework, garden, and lawn).

The grim Covid 19 figures coming out of America, Europe, and other world hotspots are the most serious since the Spanish flu pandemic which lasted from January 1918 to December 1920. It infected 500 million people and killed 20 million to 50  million worldwide. It spread globally just as the First World War was ending and entire armies were being demobilised and returning home with the disease. The photo above shows US Army Medics at an American Army hospital in 1918.

Let’s hope we can get Covid 19 shut down soon, but I don’t think we will be returning to any sort of “normal” for quite some time. 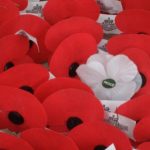 April 25th this year is going to be a bit different because of the lock-down. Our traditional parades, commemorative services, and after-match gatherings won’t be happening, which will feel more than a little strange. An adaptation to the way we remember the fallen in 2020 is being promoted – we should all “stand to” at our home front gates at 0600 hours. This is something I will be doing. If you are moderately tech-savvy, you might organise a Skype/ Facetime/ Zoom/ WhatsApp/or Google HangOuts get-together with your Clubbie and other mates afterwards – or, just make some phone calls. (Poppies photo posted on RFCA Facebook group page by Frank Tahuri on 24 April, 2014.) 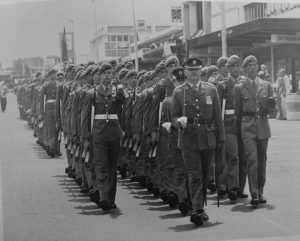 As Cadets, we were often taken by the School to Anzac Day parades and services. The photo shows OC Major Ray Seymour leading a parade of Cadets through Taupo on Anzac Day, 1983. I can remember in 1965 being part of a Cadet contingent that went to Masterton for the town’s Anzac Day parade. The 1965 School yearbook wrote it up as follows (I could have sworn we slept in Masterton’s drill hall, but no, we spent two nights in Linton Camp!): 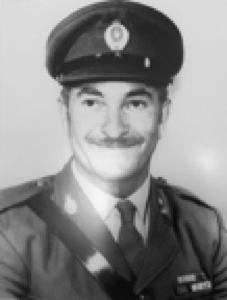 Warrant Officer Class One David William Joseph Faulkner was born on 3 March 1937.  He joined the Army as a Regular Force Cadet in January 1953.  From the outset Dave showed himself to be an outstanding soldier and leader.  He was awarded an MID as a Sergeant in the NZ Regt and an MBE as the Company Sergeant Major of Victor 2 Company in Vietnam.  Unfortunately despite all efforts I have been unable to locate the citation for his MID.  This award of an MBE to a Warrant Officer Class Two was not common and reflects his important contribution to the success of Victor Two Company’s operations in Vietnam.  Because of my association with him this portrait is of a more personal nature than earlier tributes.

Warrant Officer David William Joseph Faulkner joined the New Zealand Army as a Regular Force Cadet in January 1953. He served in Malaya with the 1st Battalion New Zealand Regiment from December 1957 to December 1958 and again with 2nd Battalion New Zealand Regiment from September 1959 to December 1961. On returning to New Zealand in December 1961, he was posted to the School of Infantry, The Army Schools, as an Instructor, and remained in this appointment until October 1965. From November 1965 until November 1967 Warrant Officer Faulkner again served in Malaysia, this time with the 1st Battalion, Royal New Zealand Infantry Regiment, and was employed as Company Sergeant Major of B Company.

During the period that the 1st Battalion, Royal New Zealand Infantry Regiment was deployed for operations in Borneo, May to September 1966, Warrant Officer Faulkner was employed as Operations Warrant Officer at one of the Battalion’s Forward Operational Bases at GUNAN GAJAK. In this appointment he was responsible for the control and administration of Border Scouts and for the interrogation of all cross Border traders. The detailed care and attention which he paid to this work resulted in the collection of a vast quantity of information which enabled the intelligence staffs to produce accurate and detailed reports on enemy camps, installations and future enemy intentions. This information was to prove invaluable during subsequent operations.

In November 1967 he was posted to Vietnam as Company Sergeant Major of Victor Two Company, Royal New Zealand Infantry Regiment and he remained in this appointment until May 1968.

During operations in Vietnam, Warrant Officer Faulkner’s ability as an organiser, administrator, disciplinarian and instructor was of great value to the soldiers in V Company, 1st Battalion, Royal New Zealand Infantry Regiment. The success of this Company’s operations and the good disciplinary record which they attained, were due very largely to the loyalty, devotion to duty and quiet efficiency which this Warrant Officer displayed over a prolonged period of employment in Vietnam. His coolness and efficiency during operations and when the Company was in contact with enemy forces had a very steadying influence on his subordinates. His overall performance as a Warrant Officer of the Royal New

Zealand Infantry Regiment in both Borneo and Vietnam operations was exemplary and in the traditions of his Corps.

Dave Faulkner was not your typical RSM.  He was a humble, enigmatic character with a wry sense of humour but never one to be taken lightly.  I served under him twice, the first time as the Mortar Sergeant in 2/1 RNZIR and second as a Staff Sergeant instructor at the School of Infantry when he was the RSM Army Schools.  I admired him greatly.  Following hopefully illustrates just what a different character he was.

He appointed me the Battalion drill sergeant.  First up on Monday morning Battalion Parades were always scheduled.  This particular Monday it was drizzling and cold.  I assumed, without too much consideration, that the parade would be called off so I dismissed the company markers and told them the parade was off.  I was still in company headquarters when the phone rang: “Good Morning, Sergeant Davies can I help?” I answered.    “Where are the markers?”  Oh bugger I thought, bracing myself for what was likely to come next.  “It’s raining Sir and I dismissed them.”  A long, long, long pause as I’m wincing in anticipation …… Click.  He hung up! Not another word was ever heard about it.  However, I never dismissed them again without first checking.  Adorning the walls of his office were drawings from his young children and another that proclaimed ‘I was a teenage dwarf’.  No display of memorabilia to impress visitors for this RSM.  He never took himself seriously, just his job.

Dave was due to be posted to 1 RNZIR Singapore in May of 1976 again as my RSM but unfortunately a medical condition prevented him from going overseas again.

Four years later I was at the School of Infantry and Dave was now the RSM Army Schools.  The Camp RSM was absent so Dave was acting ATG RSM.  The Camp Commandant had a thing about sheep straying into camp.  On seeing sheep around the flagpole he came bursting into the RSM’s office shrieking:  “Sheep RSM,  Sheep!!”.  Dave got up from behind his desk wandered to the widow, opened it, looked out and said “Shoo sheep” before returning to his desk and sitting down again.

Sadly he passed away on Sunday 15 November 1992 at just 55 years of age.  Another exemplar of our cohort.

Footnote: We are looking for your suggestions for ex cadets we can pay tribute to. So far we have acknowledged five of our more notable Clubbies, but in a couple of months we will have exhausted that supply (just kidding!). If you have somebody who you think has a story that needs to be told in this blog, put their name in the comments box below, or email Bob or Keith at rfcadet1964@gmail.com. 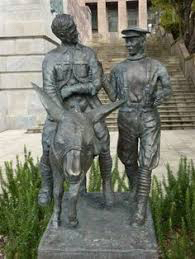 I “wrote” the following poem a few years ago. I was doing some reading about Gallipoli and realised that a high proportion of NZ’s casualties were listed as missing, so these dead had no burial plots with crosses marking their graves. This “shape” poem is an attempt to redress this in a small way. It is in the form of a cross – the top of the vertical bar lists some of the locations on the Gallipoli peninsula which were significant to the Anzacs, the bottom of the vertical bar are some of the NZ towns and cities which lost soldiers at Gallipoli, and the horizontal bar lists the names of some of the Gallipoli missing. 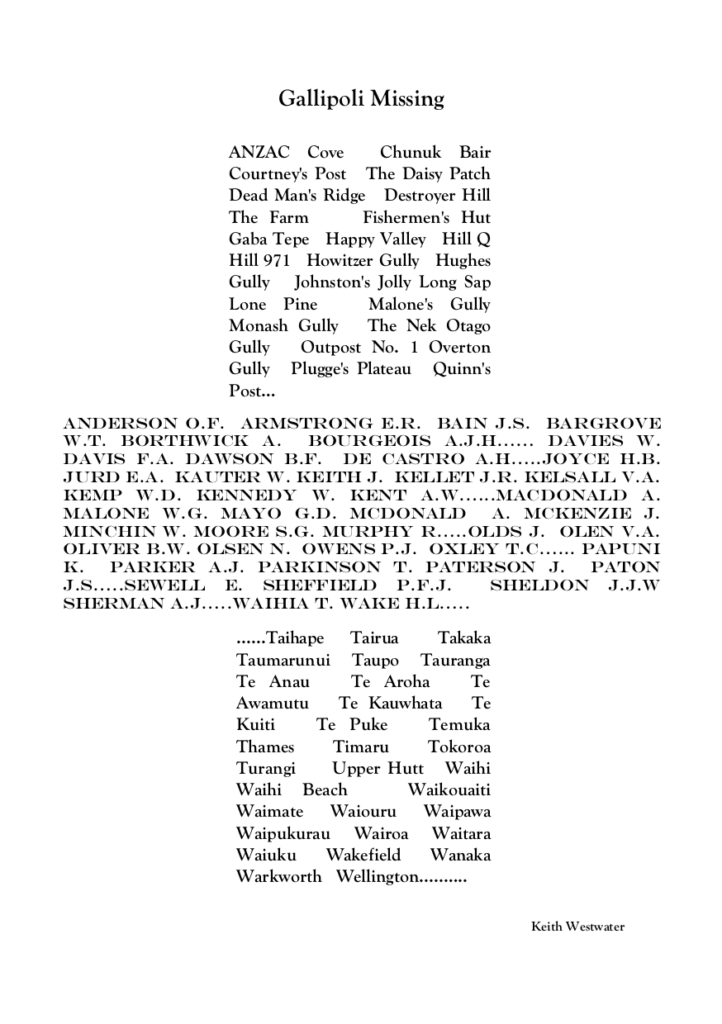 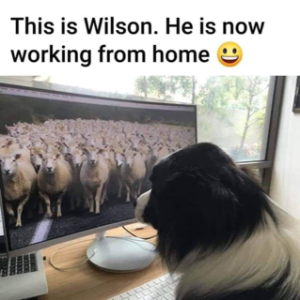 Greetings fellow Clubbies. Well here we are, nearly halfway through 2020 but who knows how far…