Although we probably all started our basic training about the third or last week of January, February was the month when ‘basic’ was on the menu all day every day. It was the time when we learnt how to be soldiers. Each night, we would take a quick look at the next day’s programme which was posted on the section or Concrete Corridor notice board and work out what was likely to be good (visit to an Army School) and what not so (P.T. with your least favourite P.T.I.). 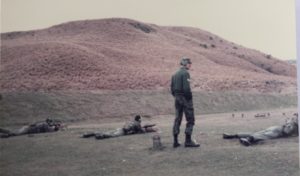 Of all our basic training activities, the ones I recall most clearly were the periods at the rifle range learning how to fire a rifle while lying down, while kneeling, while sitting, while standing, while breathing properly and aiming properly and squeezing the trigger – ‘gently, like you do a tit’ – which I never had, and not hitting another person’s target and not pointing a rifle at anyone in jest – ever, ever – and ‘cocking, hooking and looking’ when you had finished firing to make sure you had no rounds left in your chamber, and never swinging around on the firing mound with your loaded rifle when you had a misfire or when the instructor was bollocksing someone for doing just that, no matter how loud he was yelling at them, or how nervous he sounded because he was standing behind green cadet recruits with loaded rifles, and when told to check your target, running up to it with your ears ringing and your tin helmet bouncing up and down on your head and counting how many you or the guy next to you had got on yours and grabbing handfuls of the small coloured paper square patches and patching the holes on your target with them using the white paste that looked like a wet dream collection in the paste buckets and running back to behind the firing mounds and getting rid of the cotton-wool plugs out of your ears ’cause you had finished firing and lying down in the tussock and letting the hot Waiouru sun beat down on you while you took a drink from your water bottle and waited for the rest of the firing details to finish before clambering (with difficulty) onto the back of the RL Bedford which headed off down the Home Valley road to camp to deposit you at the next session on the programme. 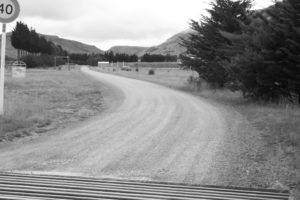 What do you remember about your basic?

Lieutenant Howell graduated into the New Zealand Army from the Officer Cadet School, Portsea on the 13th June, 1964 and was posted to the Royal New Zealand Infantry Regiment. He served with the 1st Battalion of that Regiment in Malaysia and Borneo from February 1965 to November1967, and arrived in South Vietnam on 12th November 1967 as platoon commander of 4 Platoon, Victor Two Company.

During Operation Duntroon on the 13th January 1968 , 4 Platoon was given the task of ambushing a track which was being used by the Viet Cong. Lieutenant Howell so carefully sited this ambush, that, when an enemy platoon moved along the track at 2030 hours, the whole of the enemy lead elements were caught in the ambush. As soon as the ambush had been sprung, Lt Howell led his reserve section forward to deal with the remaining enemy, but his party was pinned down by enemy fire. Lieutenant Howell crawled forward by himself until coming within range of two enemy soldiers, he was able to kill them both with grenades. Eight enemy were killed in this contact and ten weapons captured.

On the 7th February 1969 during Operation Coburg in Bien Hoa Province, Victor Two Company was attacked by a large enemy force. Lieutenant Howell’s platoon was occupying a perimeter defensive position which was attacked by the enemy. At 0630 hours Lieutenant Howell received a report that his forward section could hear a large number of enemy approaching their position. He moved forward and waited until he was sure his defensive fire would be most effective. The ensuing enemy assault, which lasted for one hour, was mainly directed against 4 Platoon and Lieutenant Howell, with complete disregard for his own safety, moved about his platoon coolly and efficiently directing the fire of his men. The enemy were forced to withdraw leaving seven dead on the platoon perimeter and the signs of many more casualties.

During these operations, 4 Platoon was responsible for killing nineteen enemy without suffering a single casualty. Much of the success which the platoon achieved is due to the personal efforts of Lieutenant Howell. His skill, coolness and outstanding courage under fire have shown a high degree of leadership which brings credit to himself, his company and the ANZAC Battalion.

Tony recently published a book: Jungle Green Shadows (John Douglas Publishing, 2019).  It’s the story of V2 Company’s six-month tour from November 1967-May 1968.  As well as the comprehensive political and military overviews – including that of the NVA, VC and other Free World forces operating in 111 Corps – Tony has described in considerable detail not only the firefights but the every-day routine of operational life including its wearying impact, both psychologically and physically, on those who fought in it.  At more than 400 pages the book is well researched, is comprehensive, and paints in great detail the operational area and environment in which the Company operated.  V2 had a very successful tour and their pride and comradeship is apparent to anyone reading the book.

Tony’s last posting was Commanding Officer of the NZSAS after which he retired to establish his scuba diving business.

If you’re interested in a vivid and thoroughly researched account of one of our Vietnam rifle companies I strongly recommended you read Tony’s book. Further information on Tony can be found here:

While I was writing about basic training (above), I recalled a poem I was introduced to as a cadet. The poem is called Naming Of Parts, by Henry Reed. It was written in 1942 and was based on the poet’s experience of British Army basic training in WWII. When I first read the poem, not much seemed to have changed in the way training was conducted between 1942 and 1964 (when I did my basic and was taught the parts of the L1A1 SLR 7.62). I think the cadet English class I was in, however, appreciated it a lot more when our teacher (either Norm Skilton or Bob Wrighton, I can’t remember which) pointed out that the poem was full of sexual innuendo. (That should make you read it more closely.)

This is the safety-catch, which is always released
With an easy flick of the thumb. And please do not let me
See anyone using his finger. You can do it quite easy
If you have any strength in your thumb. The blossoms
Are fragile and motionless, never letting anyone see
Any of them using their finger.

They call it easing the Spring: it is perfectly easy
If you have any strength in your thumb: like the bolt,
And the breech, the cocking-piece, and the point of balance,
Which in our case we have not got; and the almond blossom
Silent in all of the gardens and the bees going backwards and forwards,
For today we have the naming of parts.

Last month I asked some questions about cadet brothers. Thanks to Bob Brownlie who answered the questions in a comment to the post. Award yourself a chocolate Dickson Crest, Bob.

And the answer is: Cam McIver, Stewart Class.

Who were the tallest and shortest cadets in your class? 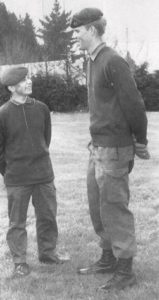 RFCA news is now in a separate Blog post – “The Barrack Square Bugle“.

A Notice Board listing upcoming Area Events and other items of note is now also up and running.

Greetings fellow Clubbies and happy New Year. By this time, as Cadets, we would have…