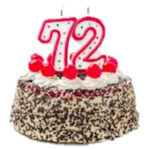 ‘A Favoured Few’ records that that “for most of the new recruits their new life started a few days earlier, as they reported to railway stations and bus depots throughout the country.” The photo below shows some of the first intake – Miles Class – with newly-issued kit. They look so eager, although one or two may be having doubts already – they aren’t smiling! Note the jackets, ties and jerseys. 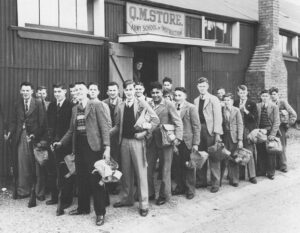 My ‘65 diary tells me July was another month of snow but there were also frosts, which led to icy parade grounds and more inside inspections. On the last day of July (a Saturday), I noted that “…snowed heavily last night – about 6″ deep” and that I “… listened to the 1st test [ABs v Boks] in [Johnny] Tipa’s cube. NZ won 6 – 3”.

The School year-books for 1964, ‘65, and ‘66 (when I was a Clubbie) show that we had the usual St Stephen’s winter sports visits in ’64 and ’65. In ’66 we had “Return visit of winter sports team from Taupo. General Education Class trip to Wellington (how many remember that?). Visit to Apprentice Wing of Lt. Gen. Vargas, Secretary-General of SEATO. 1st soccer XI trip to Huntly”.

In case you were wondering, July is: 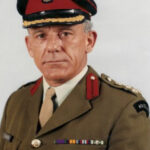 Brigadier Edward Breton Bestic was born on 27 February 1941 in Whangarei, Northland.  In 1958 he enlisted into the Army as a Regular Force Cadet.   On graduation Bret attended the Royal Military College, Duntroon, graduating from there with the Sword of Honour in 1962.  On commissioning Bret was posted to the staff of the RF Cadet School.

In 1965 Bret was posted to 1 RNZIR, based in Terendak Camp near Malacca where he saw active service in Borneo as a platoon commander.  The following year he was attached to the RAF Operations Cell HQ Borneo Operations on Labuan Island for 11 months and promoted to Captain.

Bret returned to New Zealand in 1967 as a Plans Staff Officer and then as an Army Public Relations Officer including the project to find a location for an Army Museum.  Bret was subsequently promoted to Major in the Directorate of Infantry.

In 1971 Bret was posted to Vietnam. He reverted to Captain to serve in the Headquarters of the 1st Australian Task Force as an operations officer.  After four months Bret was attached to 7 Royal Australian Regiment as a company commander for two months, being the only Kiwi to command an Australian Rifle Company during the  Vietnam War. Having passed an SAS Selection course in New Zealand in 1970, Bret was attached to 4 Troop NZSAS for a month to broaden his experience.  Bret’s tour to Vietnam was extended by three months with an attachment to the US 23rd Infantry (Americal) Division at Chi Lăng, where he qualified as a sniper.  He also spent time with the 1st Marine Division at Da Nang where he was shot down in a helicopter. 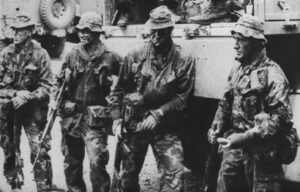 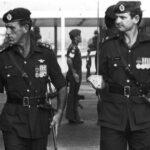 Bret returned to New Zealand and took up a position as the Chief Instructor at the School of Infantry in 1972.  He next returned to 1 RNZIR, now in Singapore, as a Company Commander in 1973.  Staff college in Kuala Lumpur and a number of staff appointments  in New Zealand followed.  In 1979 Bret was again posted to 1 RNZIR, this time as the Commanding Officer.

Following is a story that has become something of a legend in 1 RNZIR.  It may be apocryphal but somehow I don’t think so:

During CO’s orders the offender’s wristwatch beeped twice whereupon he lifted the watch to his face and said:  “Beam me up Spock, I’m in the shit!”  A stern “March him out RSM” immediately followed.  After the laughter subsided and composure returned Bret had the soldier marched back in and proceeded with his punishment.

Following 1 RNZIR Bret was posted as the Director of Infantry and SAS.  After this posting he left the Army but returned a year later.  After attending the Joint Services Staff College in Canberra and the Canadian National Defence College he was appointed Commander of the Army Training Group, Waiouru.  He then held the appointments of Commander Support Command and finally, from 1989-1993, as the Commander Land Force Command in Takapuna.

Uniquely, and following a long and successful military career, what distinguishes Bret from most was his varied and widespread international employment post-service.  His involvement with the United Nations began when he was appointed the Chief of Field Administration in the United Nations Protection Force in the former Yugoslavia from 1994-95.  In 2000 he undertook an extensive role as a consultant in the United Nations World Food Program.  This program took him to Italy Germany, Dafur, Afghanistan, Iraq, Kuwait, Liberia, South Sudan, Kenya, the Philippines, Nepal, Panama, Mongolia, Pakistan, Fiji, the USA and Samoa.  He retired in 2017 after almost 60 years of challenging employment.

In 1999 Bret ran unsuccessfully as a List candidate for the National Party (now wouldn’t that have stirred up the Parliamentary benches!).

Between 1998-99 Bret was the Manager Auckland Prisons.  A short excerpt of an interview he gave reveals his frustration at the way he saw New Zealand society’s vacillation over the appropriate way to deal with serious offenders and why he returned to the United Nations:

“After a while however, it became apparent to me that nobody knows what the actual answers are for reforming the inmates. Metaphorically, Pare is full of half-built memorials. Different folk came galloping up to the prison gates and said they had the final solution. Money was spent on one programme or another – and about half-way through, the guy sitting on his white charger realised that it wasn’t going to work, so he galloped off across the field and left the staff and inmates, half-way through a construction site; to wait for another few years until another guy came galloping up. So there was a problem with consistency.”

During his service Bret was a widely respected, no-nonsense leader with a forthright manner and moral courage not universally encountered.  Another exemplar whose career began in the Regular Force Cadet School.  Forte Fortuna Juvat.

Thanks to Bob Davies for compiling this tribute.

The tribute to Bret reminded me of a story when he was on the School’s staff in 1964: Our intake had become eligible to be charged, and Bret ‘inspected’ our rifles on parade by walking down the front of the rank and saying ‘dirty rifle’ to everyone as he passed. Fortunately, he stopped saying it when he got to me (I now suspect he took pity on a fellow shorty). Robbie Turner, who was on my right, has never forgotten this injustice. 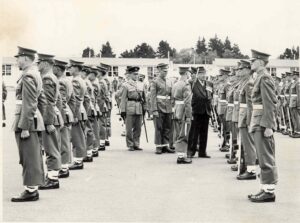 Bret was also the escort officer for Major-General Parkinson when he came to the 1964 Grad parade as reviewing officer. Ask Bret how the escort side of things went if you get a chance.

The following is Major General Parkinson’s biography from the 1964 School year book: 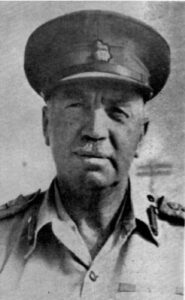 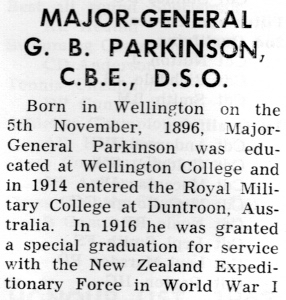 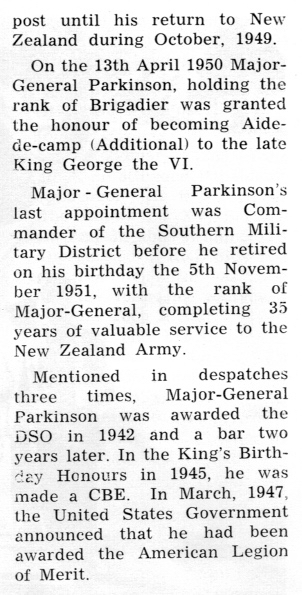 Here is another “Prohibition” poem from my upcoming cadet-days memoir:

Cadets are at the pinnacle of the smart Army dressers and marchers…If only we could get them to stop cocking their wrists!

Thou shalt not do Cadet drill under any circumstances:

Greetings fellow Clubbies and welcome to the 12th "As You Were!" post (doesn't time go…