Greetings fellow cubbies. I hope you have come to terms with your Covid 19 lockdown days and haven’t gone completely stir crazy. At the moment I feel its a little bit like waiting for that first long leave break to arrive (more of that below). As the good sergeant major might have said, as long as I don’t trip on my long hair, I think I should make it OK. 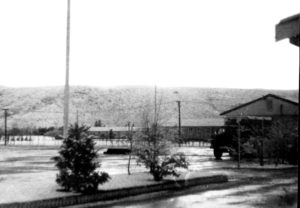 With Easter and Anzac day behind us, our cadet lives headed into the increasingly shorter days of May. By now we had probably already experienced icy parade grounds and a snowfall or two – teasers for the winter almost upon us. The barracks too, were getting nippy at night and by morning getting up was proving as attractive as the proverbial cold cup. Wrapping a towel round the waist and racing down to the showers felt decidedly like another form of punishment.

Of course, by now we would also have probably experienced the “Queen Mary” breaking down (remember the camp heating system boiler house?) and the days/weeks it sometimes took for it to get cranked back up. The delight of hearing the barrack steam pipes hissing, knocking and wheezing again was only partly spoilt by the unique aroma of wet socks getting scorched on them overnight.

Also in May, we were well into the start of winter sports and for those playing rugby the novelty of travelling for miles on the back of RL Bedfords (or whatever version was your Army truck of the day) to your Saturday match in Taihape, Utiku, ‘kune, or Raetahi, was already starting to wear off. (Unless you were in the first or second fifteens – which I never was – when wink-wink, nudge-nudge after-match drinks at the local were something to look forward to during the footy season – until someone stuffed up and ‘rules’ and the licensing laws were enforced.)

The best thing about May was that it was the month of our first long leave of the year. While we may have been away on a short guard of honour, Easter, or Anzac Day trip before then, it was the thought of getting back to our home towns and experiencing ‘normal’ life for a week or so that kept most of us going. The first few days of that break were great – catching up with old mates, going to parties and getting schicker, trying to persuade girls who we would like to have had a relationship with that we hadn’t turned into cold-hearted killers (“but would you like to see our warry gears?”) and so on. Gradually, though, the break came to an end and we more than a little reluctantly boarded the train or bus back to camp (or not). We spun a few yarns on that return journey but the closer we got to Waiouru, the quieter we got. Surely they wouldn’t have an Army Schools parade on our first morning back – would they?

The following article on the Dickson Crest was contributed by Colin (Archie) Andrews (Kippenberger 1959). Thanks Archie.