Hello one and all. Well, here we are three-quarters of the way through 2020 and if you are like me, you are wishing this annus horribilis (note carefully the spelling of “annus”) was well and truly over. In keeping with this theme of disastrous happenings, I have included one or two more in this post that happened in the month of October. 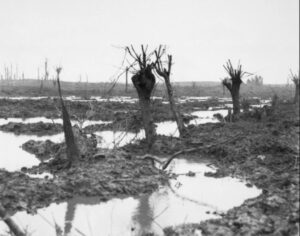 One of note was the Battle of Passchendaele in WWI. Some historians say that because of the number of Kiwi soldiers killed on 12 October 1917 (843 in just a few hours), that this day should be our national war Memorial Day, rather than 25 April. (The photo shows  swampy land near Passchendaele, Flanders, 1917.) Some quotes from New Zealanders who fought there are:

Jim Warner was at Passchendaele on 4 October (eight days earlier) when over 300 New Zealanders were killed:

“There was nothing ever like it anywhere else in the world. That mud was absolutely terrible. I know of men who collapsed wounded, dropped… never seen again, disappeared into the mud, floundered into that and were gone. You couldn’t do anything about it, nothing at all. Between our attack and the 12th it rained, it absolutely came down in torrents. It was already well soaked with terrain… It was deadly. They had tracks in some places. If you got off the track you were gone, you were never seen again. Oh, it was shocking.”

John A Lee wrote regularly from the Western Front:

“The verdict of history is that the higher command did not know how impossible the bog was through which men were ordered to advance … The men were slaughtered as they climbed out of mud to try and pass the wire. This was not the fault of our artillery … Men were asked to advance against uncut wire in country that was waist-deep in mud. None could have succeeded under the circumstances.”

John (JK) Moloney was charged with evacuating wounded men from Passchendaele the day after the 12 October battle:

“At dawn on the 13th, my CO woke me up and said ‘You are to take a party of 400 men from the brigade with stretchers to evacuate the wounded’. He had tears in his eyes. ‘They are slipping into the shell holes and drowning in the mud.’ When I arrived with my party at Gravenstafel the scene was grim. The stretcher-bearers were bogged down by their burdens and sank to their armpits in the gluey mud. We’d sent for ropes and a party of Māori pioneers came up and began extricating the bearers by passing ropes under their shoulders and pulling them out like gaffed fish. These wounded, bogged down, had been carried from Waterloo farm a distance of some 1,100 yards and the bearers were in a state of extreme exhaustion. The Māoris at once stepped into the breach and carried the stretchers away – eight men to a team – to Spree Farm, a long, heartbreaking carry of some four to five hours. It was a scene of utter desolation, of great suffering, but of supreme courage.”

The following is based on a Dominion Post obituary article on August 25th, 2016, provided by Don’s brother, Cam: 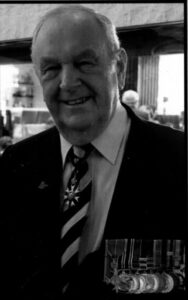 Don McIver was born in Auckland in 1936, one of four children. He spent the first years of his life in Auckland before the family moved to Dargaville where his father Norm worked as an insurance agent.

Don was educated at Sacred Heart College in Auckland and then at Dargaville High School. At the age of 16 he joined the army and served at the Regular Force Cadet School in Waiouru from 1952-53. He went onto attend the Royal Military College Duntroon in Canberra from 1954-57 after which he was commissioned as a lieutenant in the infantry. He served as Administration Officer of the RF Cadet School in Waiouru.

He met his future wife Margaret in Dargaville in 1956, and they married in 1962.

He served on active service in 1958 in Malaya and later in Malaya and Borneo from1963-65. He also served in South Vietnam, where he was appointed second in command of the Anzac Battalion serving with the 1st Australian Task Force in1971.

In 1973 he was appointed to the staff of the Australian Army HQ in Canberra as an exchange officer.

He worked as director of plans on the Army General staff in Wellington, after which he was made Commander of the New Zealand Force (South East Asia) in 1980, based in Singapore. In 1984 he was selected to spend a year at the Royal College of Defence Studies in London.

He then went on to lead the New Zealand Army as Chief of General Staff from 1987 to 1989 having served previously as Deputy Chief of Defence Staff.

He was appointed Commander of the Multinational Force* in the Sinai from 1989 until1991. The 11-nation force was formed to verify compliance with agreements made between Egypt and Israel in connection with the signing of the Camp David Peace accords in 1979.

When he returned to New Zealand, he was appointed to lead the New Zealand SIS, a position he held for eight years. Lt General McIver was then selected to work in the United Nations under Dr Hans Blix. He worked on intelligence surrounding the Iraqi weapons projects.

Back in New Zealand he served as national president of the New Zealand RSA from 2010-2014.

He was awarded an OBE in 1981 and was made a CMG (The Most Distinguished Order of Saint Michael and Saint George) in 1994.

*As a Lieutenant General, Don’s appointment was the highest-ranking operational command that a New Zealander had held since Lt Gen Freyberg in WW2.

Don’s many roles after his NZ Army service meant he was often in the news. The following two photos show him on a couple of these occasions:

Don was Patron of the RFCA at the time our history book “A Favoured Few” was published in 1998. He wrote of his time as a Cadet in the Foreword:

I still remember, quite vividly, January 1952 and arriving at Trentham Camp off the overnight express to join Williams Class, Regular Force Cadet Unit. I remember long, cold corrugated iron huts with scrubbed wooden floors, endless drill under the Clock Tower, the CB bugle call (most of us got to know it well), spit and polished boots, ‘blancoed’ webbing and polished brass, and a full overnight march across the Rimutaka ranges to the Tauherenikau Race Course for a period under canvas.

Then, after the Unit moved to Waiouru in August, I recall our brand new barracks (Olympus in my case), the early morning clanging of warming and expanding steam pipes, University Entrance exams, Basic All Arms Instructors Course No. 7 (still the best course I ever did in the Army), and the noisy, dirty, middle-of-the-night trains to and from leave. And, of course, I remember all the personalities of those days: the officers and NCOs who trained and taught us, the Senior Class Cadets who, in turn, harried and helped us, and the other youngsters who joined Williams Class (with some trepidation need I say) with me.

That was nearly 47 years ago, but the memories of those two years in the RF Cadets will always stay with me. There were good times and bad times but, overall, that period was central in establishing what sort of soldier and what sort of person, I would be. It was those experiences, that training, those associations, that discipline, and those values and ethics which set me up for my 39-year career in the New Zealand Army. I don’t regret any of it!

Cam McIver was a Stewart Class RF Cadet when brother Don was on the School’s staff as Administration Officer.

During my time in the Army, I was never in the same place at the same time as Don . In one of those funny twists of life, however, we became part of an extended family when Cam McIver, who has been a good mate of mine since 1967, married my wife’s sister. Don and I got to know each other at family do’s. The one I most remember was when, like any Clubbies would, we teamed up on Cam to relieve him of his remaining supplies of a very good wine he had foolishly suggested we try. 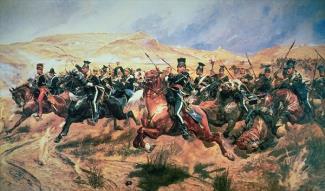 The Charge of the Light Brigade

“Forward, the Light Brigade!”
Was there a man dismayed?
Not though the soldier knew
Someone had blundered.
Theirs not to make reply,
Theirs not to reason why,
Theirs but to do and die.
Into the valley of Death
Rode the six hundred.

Flashed all their sabres bare,
Flashed as they turned in air
Sabring the gunners there,
Charging an army, while
All the world wondered.
Plunged in the battery-smoke
Right through the line they broke;
Cossack and Russian
Reeled from the sabre stroke
Shattered and sundered.
Then they rode back, but not
Not the six hundred.

Wikipedia describes this glorious British blunder, which occurred in the month of October, as follows (I was always taken by the number of items of clothing that were spawned in this War – cardigans, balaclavas, and I think there was a raglan jersey):

The Charge of the Light Brigade was a failed military action involving the British light cavalry led by Lord Cardigan against Russian forces during the Battle of Balaclava on 25 October 1854 in the Crimean War. British commander Lord Raglan had intended to send the Light Brigade to prevent the Russians from removing captured guns from overrun Turkish positions, a task for which the light cavalry were well-suited. However, there was miscommunication in the chain of command, and the Light Brigade was instead sent on a frontal assault against a different artillery battery, one well-prepared with excellent fields of defensive fire. The Light Brigade reached the battery under withering direct fire and scattered some of the gunners, but they were forced to retreat immediately, and the assault ended with very high British casualties and no decisive gains.

The events were the subject of Alfred, Lord Tennyson‘s narrative poem “The Charge of the Light Brigade” (1854), published just six weeks after the event. Its lines emphasise the valour of the cavalry in bravely carrying out their orders, regardless of the nearly inevitable outcome. Responsibility for the miscommunication has remained controversial, as the order was vague and Louis Edward Nolan delivered the written orders with some verbal interpretation, then died in the first minute of the assault.

Greetings fellow Clubbies and welcome to the 12th "As You Were!" post (doesn't time go…

Greetings fellow Clubbies and happy New Year. By this time, as Cadets, we would have…